It's been a long time, I know!!  But I picked up these brushes the other day and felt like I should blog about them today! :)

I was helping a friend pick out some foundation at Sephora over the weekend when I realized she didn't own any foundation brushes (not that you *need* a foundation brush, but you guys know me and my brushes--can't ever have enough of those!) and thus began our conversation about makeup sponges.  She wanted to be able to get a bag of sponges from the dollar store or something I told her that that just wouldn't do!  Hah.  So we walked into a London Drugs and I found a two pack of the Real Techniques Miracle Complexion sponges and I figured that'd be perfect--I got one for her to try and a second for myself!   Everyone wins!  Low and behold, though, beside the sponges was this new Eyelining Set that I just couldn't refuse! 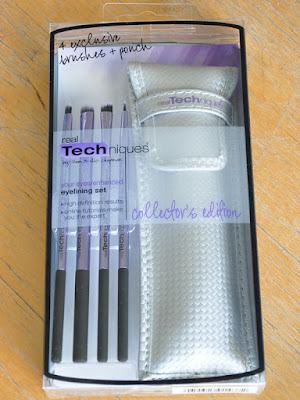 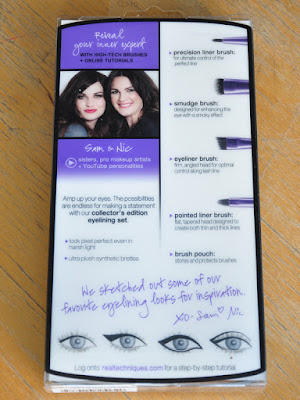 I think they cost me about $23, and for 4 brushes I figured that wasn't too bad of a deal.  The little pouch they come with is something I likely won't use, but it seems functional enough.  I could see myself using it when traveling, maybe. 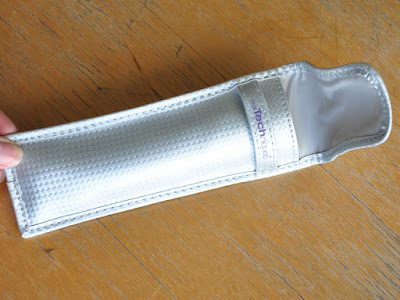 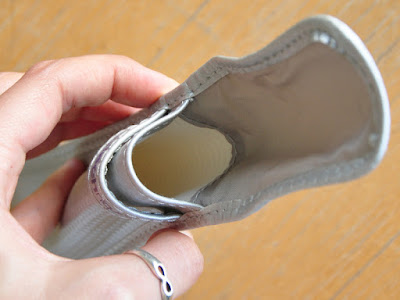 The brushes came protected in a little slotted plastic thing that kept the brushes in place.  It worked well and there was no annoying glue holding them in--which is nice! 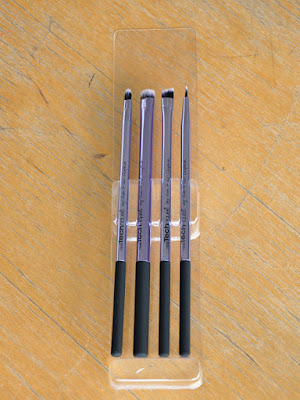 I hadn't realized until I started getting my other RT brushes out for comparison that these eyelining brushes from the "collector's edition" are a shinier purple metal, whereas if you have other RT brushes that are purple--they're more of a brushed metal.  I'm not sure what I prefer, but I couldn't help feeling like the new brushes felt even lighter and thus a bit cheaper than my existing RT lining brushes.  Only time will tell!

The below two pictures make me laugh for a couple of reasons.  When RT first had a liner brush in their "Starter" set, it came with the "pixel-pointed liner brush",  This brush, as you can see, is pretty darn large for a liner brush!  Soon it was replaced by the "Fine Liner" brush and even that one isn't very thin.  The new Precision Liner brush is definitely the thinnest of them all.  The second image makes me laugh because I have two Fine Liner brushes are are pretty drastically different--my oldest is much more blunt at the point/end whereas my newer one comes to a much finer point at the end.  I guess it's good that RT is in the practice of improving their brushes--but I think maybe they shouldn't pump out quite so many and should instead focus on perfecting each shape instead of releasing multiple versions of it?  Just a thought! 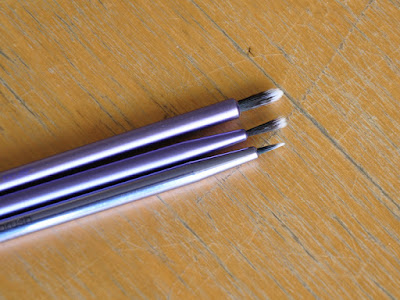 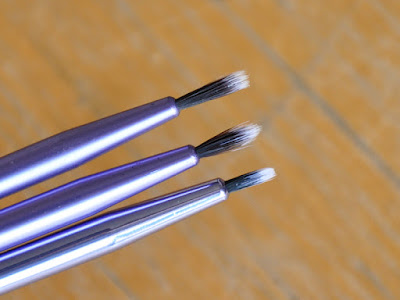 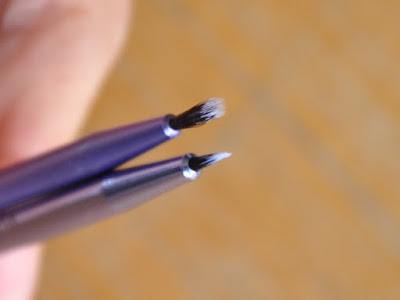 The new "Smudge Brush" is nice.  It's dense and short bristled.  It's also soft.  I like it!  I wanted to compare it to the older Accent brush as well as to the Shading brush.  It's different enough from both of my existing brushes and I think I'll get a lot of use out of this one--especially for smudging/smoking out the lower lash line. 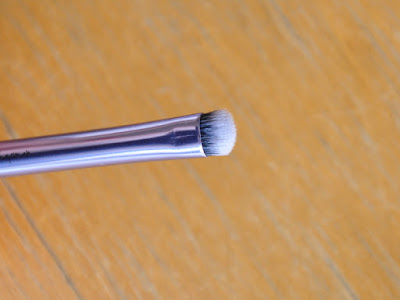 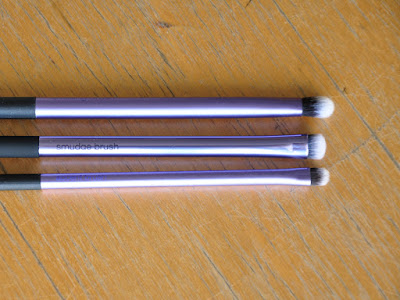 The "Pointed Liner Brush" is one that I see myself using as a lip brush and likely not as a liner brush.  Or maybe I'd use it to highlight the inner tear duct and/or apply/smudge out colour on the lower lash line.  It's a good small size and the bristles are soft. 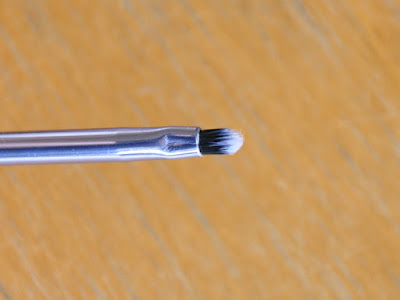 Here is is next to the Accent brush just for comparison's sake. 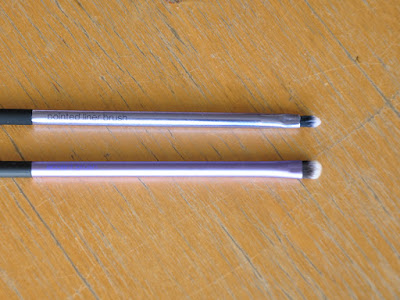 Lastly is the "Eyeliner Brush" and out of the box I'd say this one was the most disappointing.  I was hoping it might be a pretty thin liner brush, but it's quite thick.  I guess I will use it for my brows more than anything, or maybe for applying colour to the lower lash line. 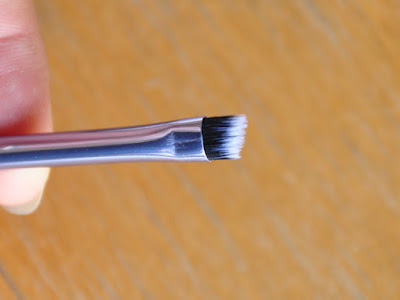 Here it is next to the original Brow brush.  I always found the original brow brush a lot too big anyways--although I do like using it for powder products.  My hopes are that I'll be able to use the new Eyeliner brush for my brow pomade!  But even for that I like the brush to be a bit more thin in case I want to draw in more individual "hairs". 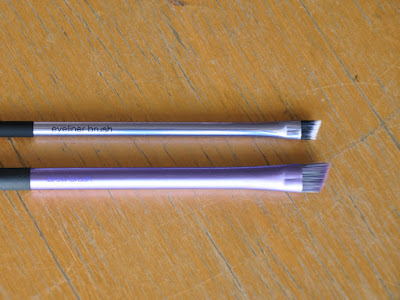 Here is the Eyeliner brush with one of my favorite angled liner brushes by Inglot (31T).  The Inglot brush is thin enough that I like using it for actual eyeliner and I like to use it for my brows, too!  Go 31T! 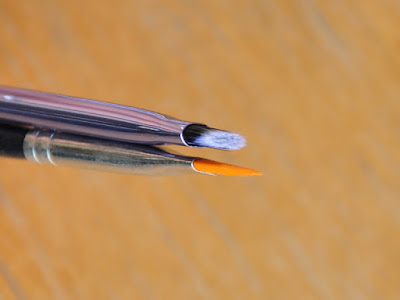 Overall I think I'll get a lot of use out of the brushes in this set, but I think I was hoping they'd be a bit more "different" than they are.  That's okay by me though, I've almost never met a brush I didn't like!  :) 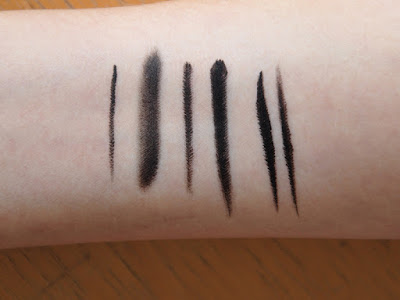 Thus concludes my research for "science"!!  Do you have a favorite RT brush?  What is it? I want to know!  Now that I might be back into the swing of blogging, what would you like to see from me next?!  :)

Thanks as always for dropping by!