Well. I have finally joined the club. Which club, you ask? The Sugarpill fan club, of course!! Yes, I know, it took me long enough--but I joined eventually, so give me a little bit of credit!

When I saw that Sugarpill was having a 1 year anniversary sale on the 14th of February, I could NOT be stopped from putting in my very first order. And since this was my very first order, I did not mess around. I wanted every vegan pressed shadow they offer and then I also wanted a range of the loose "ChromaLust" eyeshadows to try out. And let me tell you, Sugarpill lived up to my expectations.

Side Note: Amy, of Sugarpill, mentioned on their FB Fanpage the other day that Tako (their pressed "white") and Bulletproof (their pressed "black") will soon also be vegan, and I am overjoyed about that!!

I received my package as the sun was setting--so I apologize for the pictures not being as awesome as they could be--but once I get the flash involved, you'll be even more impressed, I promise!

As I was expecting, my package arrived in the adorable white box that everyone raves about. Include a kitty on things and I am pretty much sold! 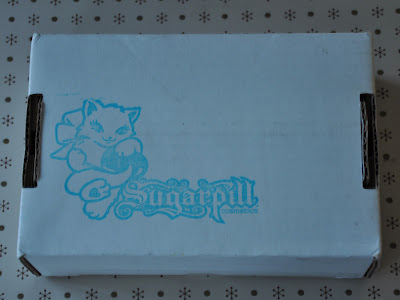 The inside of the box was sooooooooo neatly packaged. I don't think my products budged an inch! 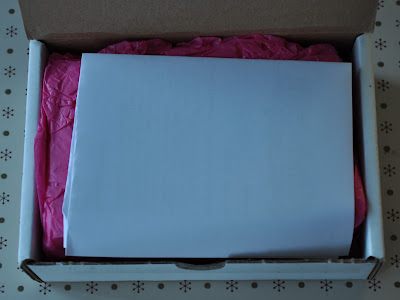 My invoice had a nice personalized thank you--an awesome touch. 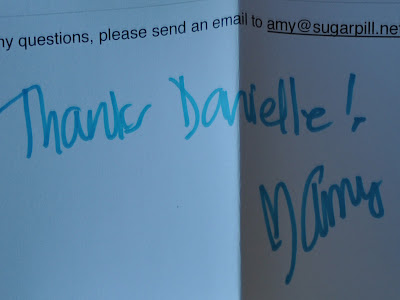 The inside of the package was packaged as immaculately as the outside: 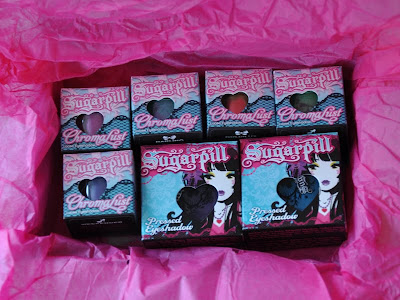 And there were a few extras hiding out underneath. A cute sparkly sticker, a neato business card and a sample of their ChromaLust loose eyeshadow in "Lumi." 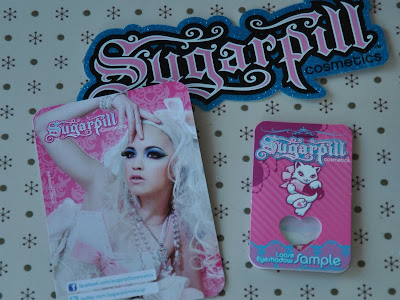 To start out with, I ordered five ChromaLust loose eyeshadows. Magentric, Tipsy, Weekender, Darling and Goldilux (I purchased Goldilux for a friend, so it won't appear in my swatches or pot pictures--I didn't want to mess around with the pretty box!). First: the packaging. Adorable. I don't want to recycle them!! I loved that each pigment came in a box that had its ingredients listed on the backside. 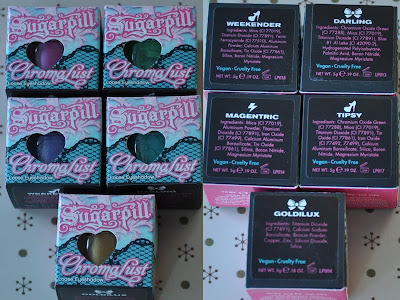 The tops of the jars have the Sugarpill logo on them. It isn't a sticker--the logo is printed on the lid itself. Very cool! 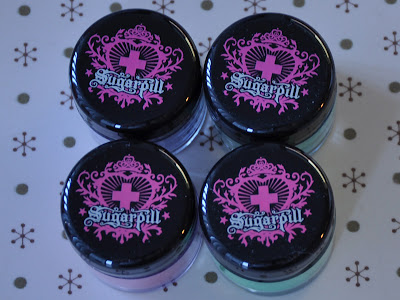 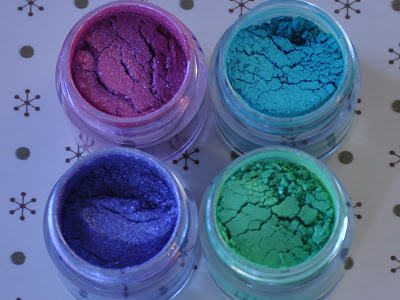 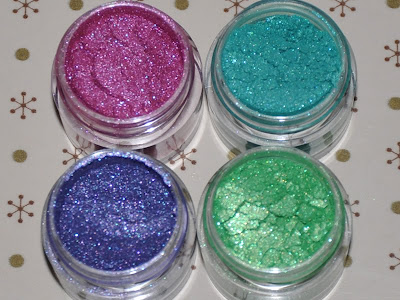 (With flash! Such an amazing magenta, teal, purple and green. Eeee!!)

How pretty are those?!! GAH! And swatched, over BARE skin (no primer, with flash): 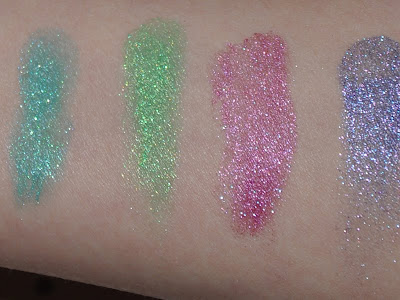 These loose eyeshadows are seriously wonderful. They are sparkly, smooth and so CLINGY (in a good way!) to a brush. I'm all kinds of amazed by them.

Then on to the pressed. Again, with their freakin' adorable packaging! 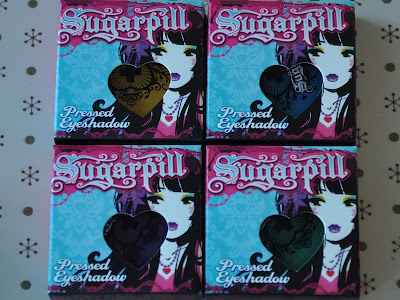 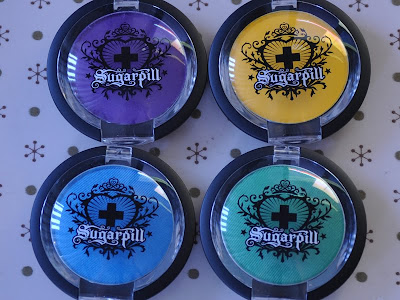 And a close up of each: 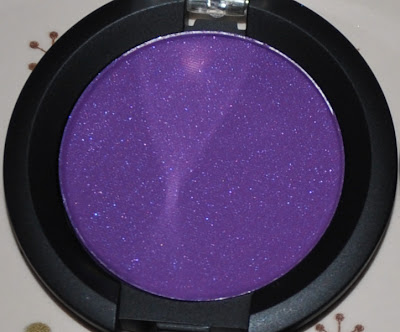 Poison Plum: A red-based purple with a slight pearlyness/sparkle factor. 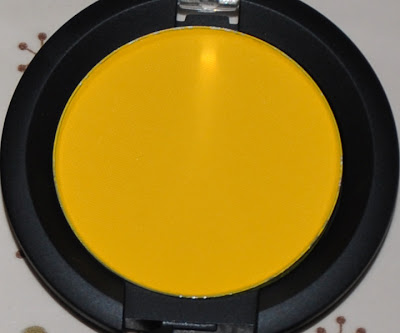 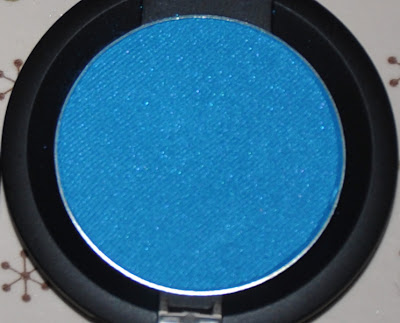 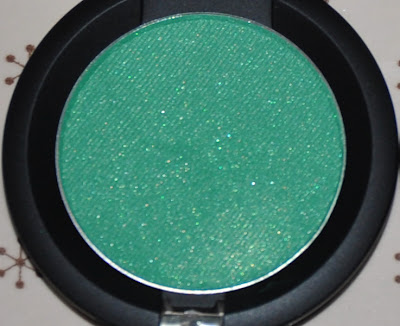 Midori: A lovely green with sheen.

Swatched, the pressed shadows look like this (again, NO base or primer): 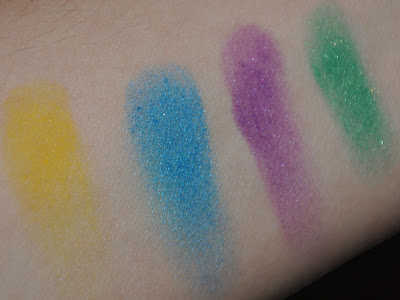 My fingers were very happy after all of this swatching, let me tell you. 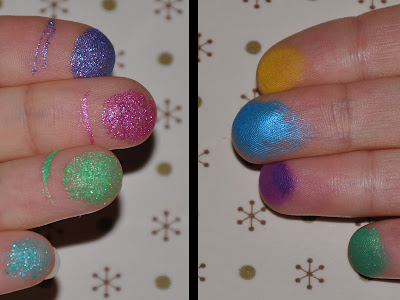 I couldn't wait to start playing, either. 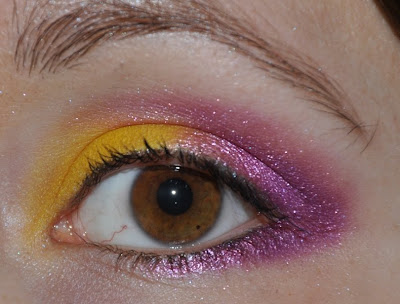 Buttercupcake>Magentric with Poison Plum on the outer corner. 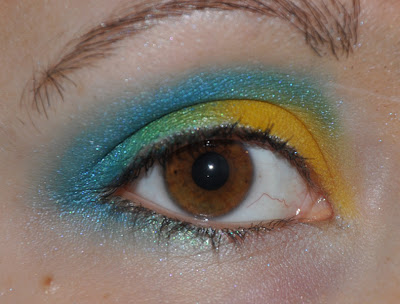 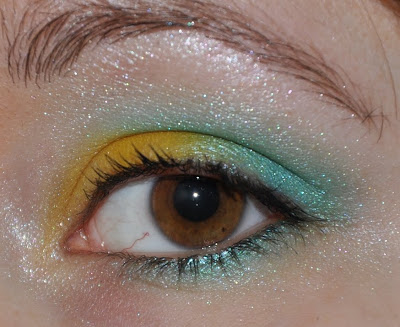 Buttercupcake (do you see a pattern, cause I sure don't...)>Darling. Madd Style Cosmetics Up in Smoke "White" used as brow highlight and duct colour.

I will definitely be purchasing from Sugarpill again. The quality of the product is superb and worth every penny. I totally need the pressed white and black, once they are released as vegan. Oh, do I ever need them.
Posted by dslrbbt at 7:51 PM