A while ago I picked up the new Madd Style Cosmetics "Gloomcookie"--a neato purple taupe colour that has a strong green duochrome.  I just knew that it was going to play nicely with Sugarpill's "Poison Plum" (thankfully I have not one but TWO pans of this colour when it was still vegan!) and so I had to try it out!  I also added some blue, Sugarpill's "Afterparty", to the look for a little somethin' unexpected.  This is the look that resulted: 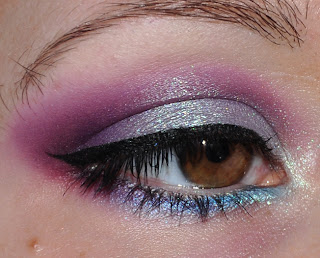 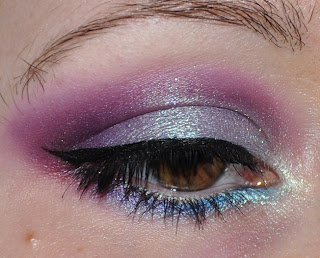 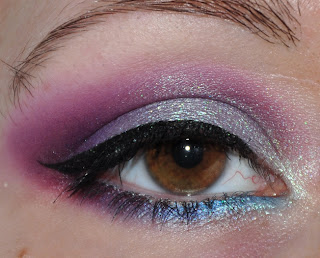 
Products used:
What colours did *you* use on your eyes today??

Welcome to yet another tutorial!!  Yesterday I asked for some tutorial suggestions/requests in the Madd Style Cosmetics FB Group Page and two lovely fans gave some suggestions that I combined to make the following look!  Also!  Thinking of using a teal with a yellow made me want to try something out that I had recently watched on youtube by the ever wonderful Nikkietutorials.  In her tutorial, Nikki keeps the bright pink in the inner part of her crease and I thought to myself: "I can do that with yellow!".

If you want to find out how I achieved the following look, then please keep on reading/watching (yep, there is a sneak attack "talkie" video where I demonstrate my winged liner!).

Yesterday I happened upon some information via the Real Techniques Facebook page that made it *seem* like the brushes are now sold in a few select stores in Canada!  What what what?!  I know, I know.  I'm as excited as you are!  Word on the FB street (plus some internet searching I did last night) is that they are available at Walmarts (which I will *not* step foot into).  But!  Evidently they are also available at select London Drugs locations!  Hooray!

I just checked out two London Drugs locations (1650 Davie and 1187 Robson).  Neither of these locations had any of the Real Technique brushes.  I am going to check out the Granville and Georgia location this evening and I am thinking that it will be my best shot.  If they're not there, I think I'll also check out the one on Hastings and Abbott (a location I have never visited so I'm not sure how good my chances are).

Basically this blog serves the purpose to chronicle my search!  That way...if any fellow Vancouverites are looking for the brushes...hopefully this post will come in handy!

Edit: 8:19pm.  Well darn!  They did not have the brushes at the Granville/Georgia location OR the Hastings/Abbott location!  Clearly I need to get my butt to the ones on Broadway to check those next!

Edit: 9:43pm (May 5, 2013): I *finally* found them!!!  They are available at the London Drugs on Cambie and Broadway!  Woo hoo!  I bought myself the Travel Essentials kit this evening!

Last night I had some inspiration to pull out my Naked Cosmetics colours and I decided to combine them in a look with Madd Style Cosmetics and Sugarpill!  I only had "plans" for the gold to orange to pink on the upper lid (I hadn't used my Harvest Moon stack by Naked Cosmetics yet AND I hadn't had a chance to play with my newest loose Sugarpill colour, Decora, yet!  So this look was going to accomplish a lot!).  The lower lid turned out kind of rainbow-y and I really like the results! 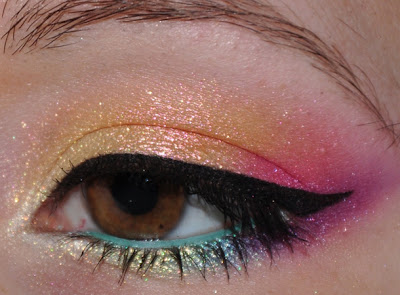 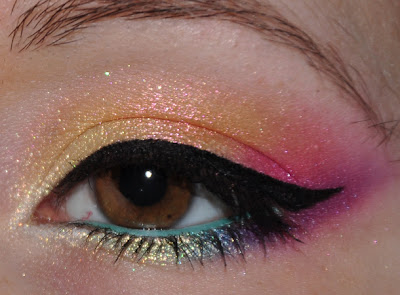 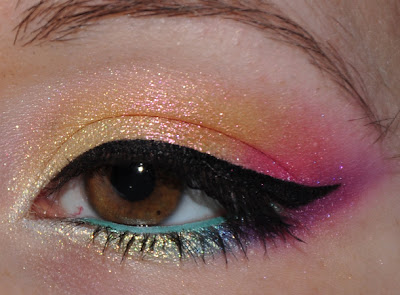 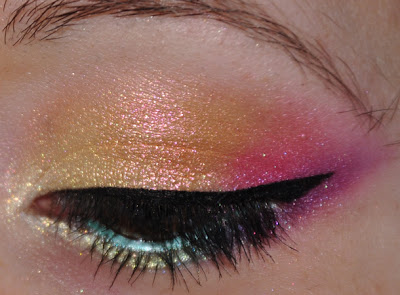 What are some of your favorite companies to put together in a look?  I think Madd Style Cosmetics, Sugarpill and Naked Cosmetics all played rather nicely with each other here, don't you??  :)
Posted by dslrbbt at 2:14 PM No comments:

New (to me!) Inglot Colours!

A couple of weeks ago I had the chance to go to my *very first* Inglot makeup counter!  I found out before having to go down to Seattle for a work-thing that there was an Inglot counter at the Macy's in Alderwood Mall.  Of course I made the whole car do a bit of a pit stop at Alderwood so I could run int with my giant list of colours to look at!!

My experience at the counter was pretty good.  I was somewhat disappointed to see that the numbering system was a bit haphazard.  I had a list of numbers (sorted by colour group) on a piece of paper, but the only way for the Inglot saleswoman to know which colour was which (say in the "blue" group) was for her to turn over each and every blue pan to look at the bottom of it.  I think a better system might have been if the numbers were listed on the top somehow!  Or if there were some kind of "map" available so that we'd know which colour was where.  I only had 30 minutes to look around before I had to meet back up with my work-group, so the woman and I were flipping colours over like crazy to try to find the ones I had wanted to look at (there were almost 40 colours on my list!).  In the end, it alllllll worked and out and I left the counter with 14 new colours.  YAY!

Here are some pictures (and swatches) of what I picked up:

Each colour comes packaged in a little plastic...holder?  I guess we'll call it a holder!  The front plastic is "hard" whereas the plastic on the back is soft and you can peel it off to release the colour from the holder. 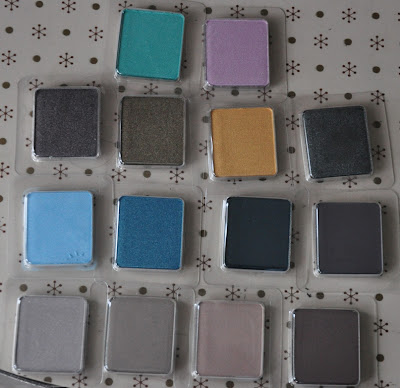 Here they are outside of their holders. 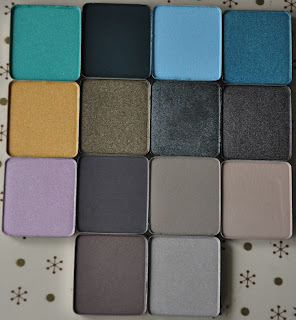 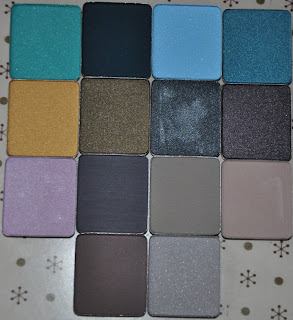 With Flash (so you can see the shimmer a bit better!)
And for some swatches!  If you own any Inglot shadows you know what I'm saying when I say that the texture of these are incredible. From the pearls to the mattes to the mattes with glitter (the "D.S."), they all perform wonderfully! 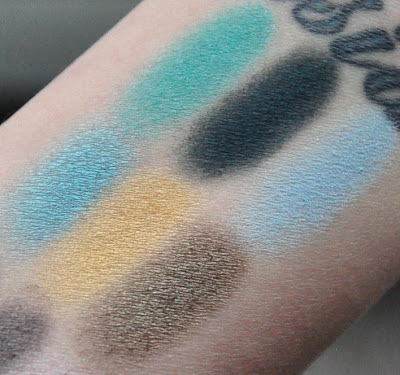 Top to bottom: 451 Pearl (a blue-based gun-metal type grey with a silver shimmer), 434 Pearl (a purple-taupe-ish based...grey??  I have a hard time describing this one, obviously!  It's pretty though!) and 440 Pearl (a light pearly purple). 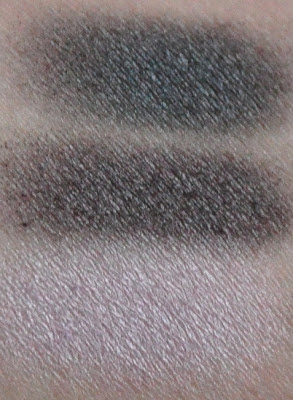 I decided to get quite a few taupes/browns in this shop and I am glad that I did!  These are beautiful!!

Top Row (left to right): 376 Matte (a medium-dark grey that has some purple and brown qualities to it), 349 Matte (a light cool-toned brown-taupe) and 390 Matte (a warm-toned beige).
Bottom two: 363 Matte (a medium brown with a slight grey tinge) and 501 D.S (a beautiful grey-toned beige with silver glitter). 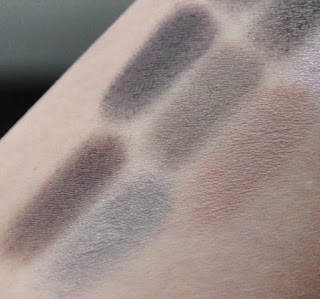 Here is a shot of all of them with the flash used so that you can really see the shimmer and glitter in them!

I'm so excited to play with these!  Eeeeeee!

I also picked up three brow powders and a brow wax, but I haven't taken swatch pictures of them yet!  Let me know if you'd like to see swatches.  I'm very happy with the middle and third brow powders.  The saleswoman suggested the first and second colour and I asked her for a suggestion of a "darker" one as well.  The light colour is nice, but for some reason I think it looks a bit odd when I use it.  I may just have to try experimenting a bit more.

These photographed a bit strange though.  568, although "ashy" is quite a bit warmer than it appears in the photo.  560 is more "brown" and less grey than it appears.  The same goes for 569--it's more of a dark ash brown than a grey (as it appears in the photo).  The wax, as well, is  quite a bit lighter.  I'm really not sure why my camera doesn't like taking pictures of these!  The texture of them, however, is wonderful and I really like mixing 560 and 569 together to fill in my brows.

The last thing I picked up was another black gel liner (in 77).  My last one dried out and then I accidentally...set it on fire in my microwave...but now I have a new one, hooray!  I am also kicking myself for not picking up some of their "Duraline" when I was there because my teal and green gel liners have *also* dried out and the Duraline can revive them.  Luckily I am heading back down to Seattle in the middle of June so I'll be able to get it then!

Have you ever been to an Inglot store or an Inglot counter?  If so--what was your experience?!!

Typing up this blog made me super inspired to play around with some of these colours.  I decided to go "dirty-smoky"!  :) 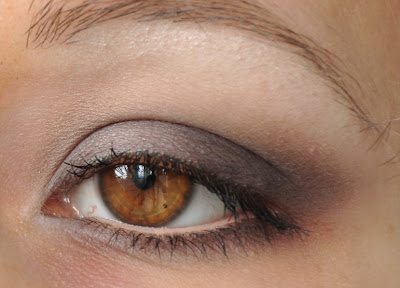 Welcome to my next tutorial!!  Yesterday I posted a look in the Madd Style Cosmetics Facebook Group Page (click the link to request to join--it's a fun place!) and it was requested. by the lovely Tanya. that I do a tutorial for the look.  And here the tutorial is!

If you'd like to find out how I got the following look, then please keep on reading.  :) 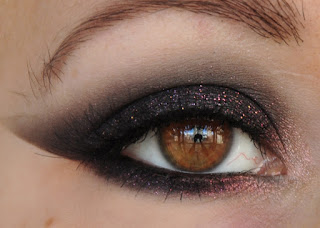