After my first wonderful experience with MTCoffinz I knew that it was only going to be a matter of time before I had to put in my second order! That time has came and went! Oh, has it ever! A few weeks ago a 20% sale was announced, I think it was for the 4th of July (U.S. holidays don't really stick in my mind--makeup sales, however, those stick like crazy glue!!). I decided I had to pick up a few more of their colours--especially the brighter ones as my first order only had the white (Gossip), black (Nocturne) and two of the darkest colours (Fallen and Veruca). I had intended to purchase four colours, but then I couldn't decide between Wormwood and Nemesis. The easiest decision to make: just to buy BOTH OF THEM. And I'm happy that I did, as you will see!!

The MTCoffinz colours I have so far are all vegan (of course), hypoallergenic, paraben-free, fragrance-free and gluten-free--as is explained on the MTCoffinz website. It's always good to have more awesome vegan cosmetics options around, if I do say so myself. :)
My package arrived promptly (seriously, MTCoffinz shipping astounds me!) and was very well (and securely) packaged. The little "Thank you" note was awesome and piiiiiink! I also really appreciated that this box fits in my mailbox--yay for tiny boxes! It meant I didn't have to go to the post office to get it! Win! 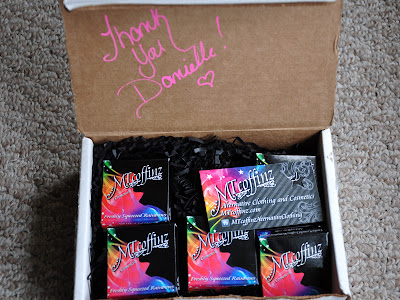 (All pictures can be enlarged by clicking on them.)
I ordered five colours. Clockwise from the pink (on the left): Charisma (described as a rosy pink with purple toned pearl and hot pink shimmer), Wormwood (a teal with grassy green undertones and holographic shimmer), Bad Influence (a soft lilac with pink and purple pearl and bright purple shimmer), Afterburner (a reddish coral with red and orange shimmer) and Nemesis (a soft turquoise with green and hologram shimmers). I really love the packaging of these. Again, I forgot to take a picture of the little brush that is hidden within the bottom of the snap-closure type...jar? I actually have no idea how to describe these things! Anyways, there is a hidden little sponge brush within each shadow. I'm sure it would come in really handy for on the go touch ups! 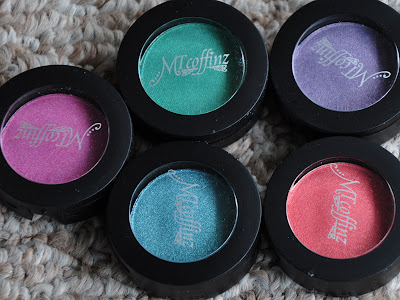 Here's a picture with the lids flipped open. 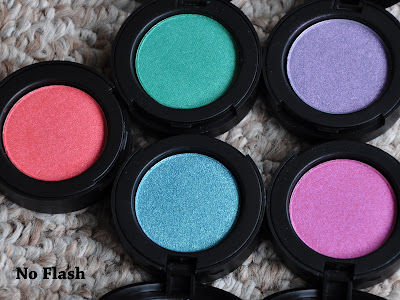 And one with flash (because it helps to show the sparkle and shimmery factor!)! 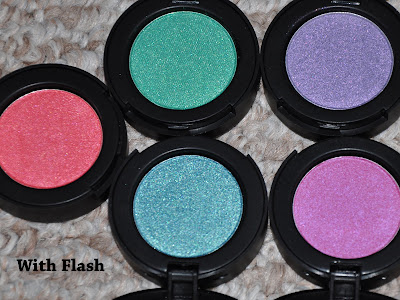 (Here you can really see how Bad Influence (the purple) has that pink sheen to it. And if Charisma (the bottom pink) had been in better focus you'd be able to see the neat purple/blue-ish shimmer that it has.)

And here they are on my fingers! The texture of these is really really nice. They're silky, smooth, evenly pigmented. Just gorgeous. 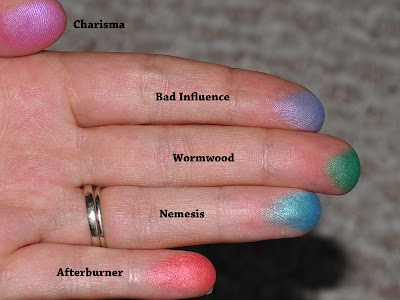 Here they are swatched on my arm (over the MTCoffinz "Under the Rainbow" eye primer). Aren't they just so pretty?!! Bad Influence, again, with it's amazing pink sheen. Wormwood is such an intense great greenish teal!!

Since Charisma and Bad Influence impressed me the most when I first received my package, they were the first two I put together in a look. I applied Gossip (MTCoffinz's white) in the duct and then applied Charisma all over the lid and on the first half of my lower lash line. Then I applied Bad Influence on the outer eyelid and into the crease.

The day (or so) after receiving my package I decided to play with all of the other colours (except for Afterburner, I still haven't thought up an awesome plan with that--I'll probably have it play with Charisma. I think any colour could play nice with Charisma!).

Here is a look I did with Gossip in the duct, Nemesis on the lid, Bad Influence on the lower lash line, and Nocturne (MTCoffinz's black) as a dry winged liner. I was really happy with how Nocturne applied dry! It's a soft version of liner, but I think it's quite pretty. If I used it wet (or with a wet brush, rather), it'd have been much stronger of a black.

In similar style I did a look with Gossip in the duct, Wormwood on the lid, Charisma on the lower lash line, and Nocturne as the liner.

Hopefully these pictures demonstrate even a tenth of the awesomeness that is MTCoffinz pressed shadows. A few new colours are going to be released soon, but I know that of the current colours, I will neeeeeed to get Calamity next! Check out their facebook where Jinx (the mastermind behind MTCoffinz) usually posts sneak peeks of new colours and all of that jazz!! There is also a colour of the week that is offered for 20% off--so you can slowly build up your collection of these pretty spectacular colours--and if you "like" them on FB, you'll be able to keep track of which colours are on special that week!

If you have any questions or want to see particular colours in action with different colours, let me know! I'd be more than happy to play around. :)