Starrydance Cosmetics is the brain-child of the most lovely Gwynn Farrington. I met Gwynn through a common bad experience we shared (otherwise known as cosmetics company whose name I can't even bring myself to type out...) and after said company met its very timely demise, Gwynn has been living out one of her passions by making her own pigments. A few months ago Gwynn had an open calling for interested people to take part in the beta sample program so we could give her feedback before she officially launched her store. By my agreeing to be involved with the beta program, I committed to writing a blog/review, taking pictures, and doing some looks with the pigments I received. My review is coming a bit late (my samples did get to me a bit later since they had to cross a border), but I finally have all of the pieces together!

Here are the samples that I received (all pictures can be enlarged by clicking on them): 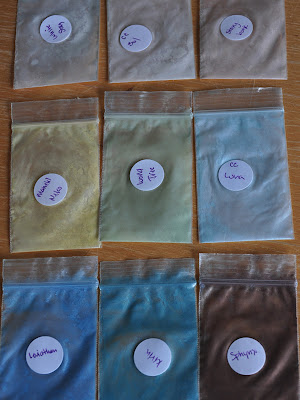 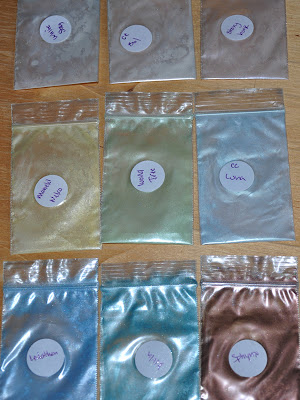 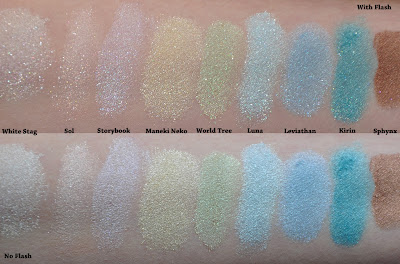 (Swatched over MT Coffinz "Under the Rainbow" primer, no base.)

My samples arrived with a comprehensive Sample Beta Program manual that describes all of the colours (ingredients, eye/lip safe descriptions and vegan-ness listing) Gywnn plans to have in her shop (at first). As you can see, my samples came in baggies--but worry not, samples, when sold officially through Starrydance Cosmetics, will be in 3gram pots. Yay for that, because baggies aren't much fun to work with!

The descriptions of the colours that I received:My thoughts: I quite like White Stag! It is a very strong white!
My Thoughts: The picture doesn't pick it up as well, but the duochrome in this colour is suppppppper pretty. You definitely get the red and orange shifts and it's gorgeous!
My Thoughts: A pretty soft colour, for certain!! It pairs really well with pink toned colours.
My Thoughts: The swatch of this one was lovely--but as you'll see later on, I was not able to get it to perform as well on my eye. I mentioned this to Gywnn and she assured me that she has tweaked the base of this colour so that it is stronger.
My Thoughts: Like Maneki Neko--I found this colour to be lovely on the swatch, but I had to try really hard to get it to show up on my eye. The base on this colour has also been changed and I'm sure that it will be less sheer as a result.
My Thoughts: Lovely!! I consider this more of a very light blue colour, than a white (and I think that's because in the bag, it does appear quite blue)--but it is very very pretty. I'm a total sucker for things with a gold duochrome though!
My Thoughts: A pretty blue for sure!
My Thoughts: I was very excited to receive this one as I had seen pictures of Gwynn using it on herself. It's a great teal--the swatch was a big more pigmented than I was able to get it to appear on my eye--but as you'll see--I think the colour pay-off I achieved is still pretty good!
My Thoughts: My favorite of the bunch! It's a deep rich brown/bronze and I looooooooove it!

The texture of all of the pigments is very silky and they were blended very well (no unmixed chunks or anything like that!). They're all quite glittery--which is good--if you're a fan of the glitter! I did find the colours a tad on the "pale" side (all but Sphynx--that colour is a very strong brown!), but I think that's more because my current collection is pretty loud and bold. The more subtle colours of Starrydance Cosmetics definitely have their place and if you're looking for pretty subtle colours, I think Starrydance Cosmetics will give you many many options to work with! White Stag, Storybook and Sphynx were the stand out colours for me!

I did three looks using all of the colours that I was sent.

The first look I tried out:

The second look I tried out (Oh, Sphynx, how I love thee!):

And lastly, the third look I did:

((Inner to Outer) Sol>Maneki Neko>World Tree)
The third look really demonstrates what I was talking about when I described my experience with Maneki Neko and World Tree. In the baggies, these two colours were very pretty and appeared light, but not sheer. And on swatches, I found the same to be true--but something happened with I put them on my eye. And I *packed* these colours on! It just goes to show you the importance of a good base! I'm sure the new version of these two colours will be much improved. The first two looks, however, had good results (I think!).

I definitely plan to order some full sizes from Gwynn in the near future. And if you're wanting to go check them out, Starrydance Cosmetics can currently be purchased through their Artfire page and this Friday (if all goes to plan) they will be officially having their Grand Opening which will also involve the unveiling of their second shop on Etsy!!

I'm looking forward to what you have up your sleeve, Starrydance Cosmetics!
Posted by dslrbbt at 8:57 PM