I was so excited yesterday to see my very first MtCoffinz cosmetics package waiting for me in the mailbox when I got home! Jinx, of MtCoffinz, is mainly involved with making clothing and accessories, but just recently she has launched her own cosmetics line. Here is a wonderful note that Jinx posted on the MtCoffinz Facebook fanpage that explains the philosophy behind her cosmetics brand. In the note it is explained that she does not hand craft the cosmetics products herself, they are produced in a sterile lab. The colours, textures, shimmers and product size are all up to Jinx and from what I can tell from my first order, she definitely has all of her proverbial ducks in a row. A bonus about the MtCoffinz makeup is that it is hypoallergenic, paraben and fragrance free. And of course--they do not test on animals and so far--ALL of their eyeshadows AND their primer are 100% vegan! Yay!

The official launch of the cosmetics line was on May 11th. Jinx explained that due to an error in the sizing of the boxes for the pressed eyeshadows (the boxes were cut too small) that the store would be opening with 20% all prices on shadows and primers! Of course, I put in my order that morning. (Remember that I said I received it yesterday (Friday)?! FAST SHIPPING HOLY SMOKES. I am very very pleased about that!) There was also a little bonus that if you bought a certain amount of shadows, you'd get a little surprise. I ordered four pressed shadows and the Under the Rainbow primer.

My package arrived in a standard bubble mailer: 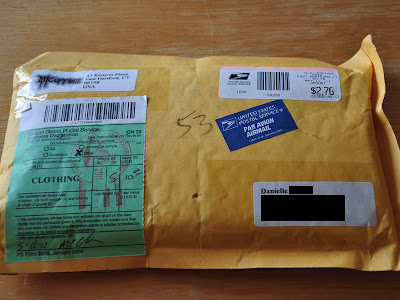 And inside were these things (little hand touches like the "Thank You" on the tissue paper is a lovely surprise): 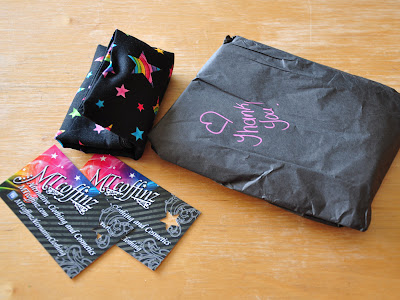 I am going to apologize right now for the blurry photos. When I was taking them, the screen on my camera misleadingly convinced me that these pictures were more clear than they turned out to be! I promise that the product itself is NOT fuzzy. :P

The MtCoffinz business cards are adorable. Rainbow wonderfulness on the left hand side and a star cut-out on the top right. CUTE. 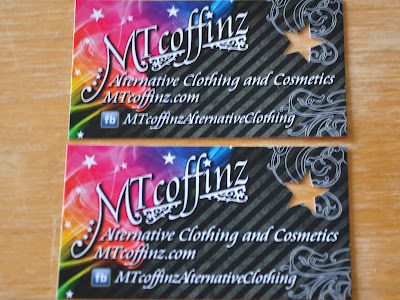 The bonus that I received (because I ordered four shadows) is a nifty little MtCoffinz pouch. Rainbow stars! The cuteness continues!! This pouch is a great size--it will fit a lot of stuff in it! (It's roughly 7 inches X 9 inches!) 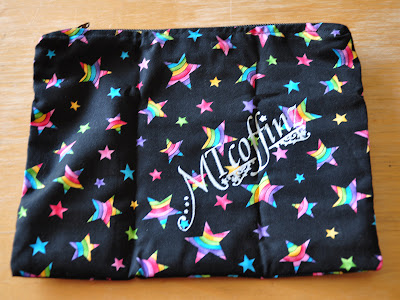 And the inside is a super bright (awesome) green: 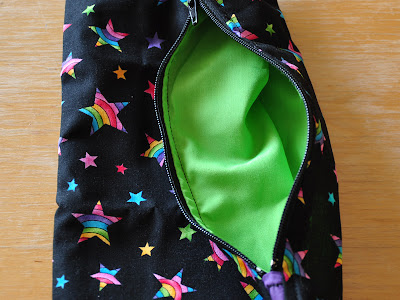 I'm going to begin with the primer. If you've been following me for a while...then you know my dilemma when it comes to primers! (Don't know what I'm talking about? Read here and here and here AND here--seriously. Primers cause me A LOT OF STRESS!) The MtCoffinz primer, called "Under the Rainbow" came to me packaged like this: 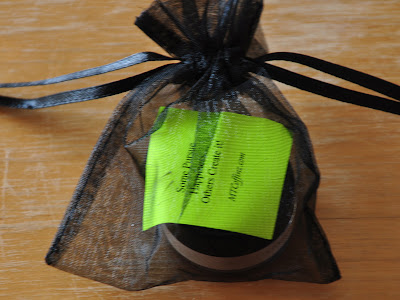 It regularly runs for $14. You get 7.5gms of product for this price. I would say it's DEFINITELY worth it.

The bottom of the pot has all of the ingredients listed: 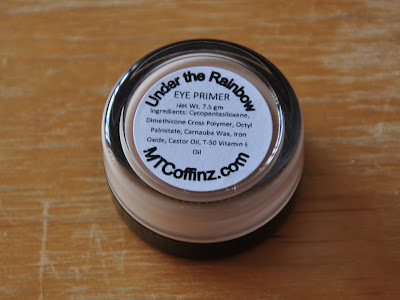 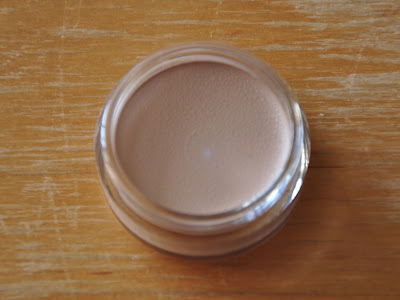 It is kind of similar to the All Natural Face primer that I use as far as how it's packaged and how I apply it--but THIS primer is definitely more tacky and so far I have experienced pretty great results with it helping my shadows NOT to crease. YAY FOR THAT. (At the end of this review I'll attach some pictures as evidence.) It does have a "concealer" type scent to it that seems kind of strong in the pot, but once it's on your lids...you don't notice it? Heh. If you want to know more information about this product, there is a super clear note posted on the MtCoffinz FB fanpage.

On to the shadows! They come packaged in these cute little boxes (blurry picture, I know, I know!). The backs say: "Lavishly pigmented Pressed Eyeshadow in brilliant colors to take you from day through night. The silken texture allows you to achieve the bold looks you desire." Like the primer, the shadows, too, have a note on the FB page. You can read it here. The shadows are regularly $10 a pop--and for that you get 4.5gms of product. 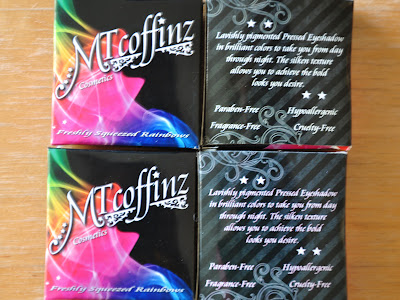 Here is the packaging of the shadows themselves. The tops have the MtCoffinz logo printed on the tops, the tops themselves are hinged, and the bottoms list the ingredients. The cool thing about these is that there is a sponge brush hidden in a compartment so you can do emergency touch ups! I didn't take a picture of that, so you'll have to find the brush for yourself. :) 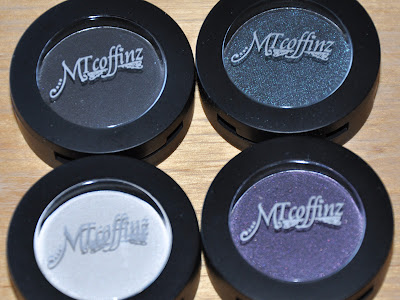 I bought Gossip. It is described as a opaque white with soft pearl tones. The texture of this one is SUPERB. So silky smooth. When I run out of this one, I will be ordering it again FOR SURE. 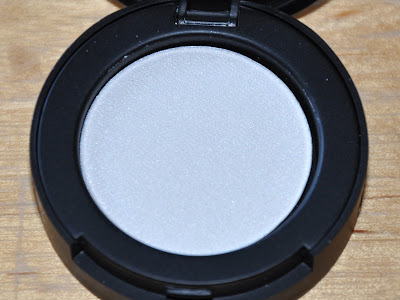 I also picked up Nocturne--a matte black. I find the texture of this one quite "hard" to the touch...which isn't unusual for matte pressed shadows, I have come to realize. 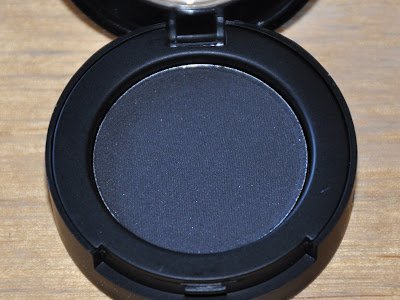 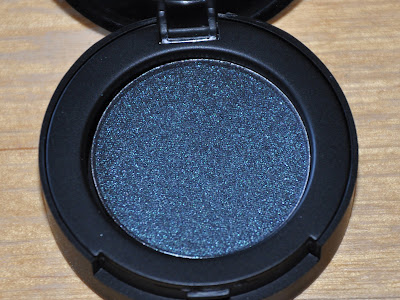 And last: Veruca (I am SUCH a sucker for purples!!). Veruca is described as a deep purple with black undertones and pink shimmer. 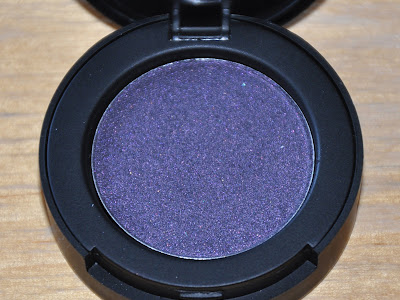 I actually managed to get decent swatch pictures of them! Swatching is hard for me, for some reason!! These were all swatched over the Under the Rainbow primer. As you can see--Gossip KICKS ASS. Nocturne is a bit on the pale side--which isn't necessarily bad for a black--sometimes you want a softer black! Veruca and Fallen show up great here and the purple/blue tones definitely show nicely. 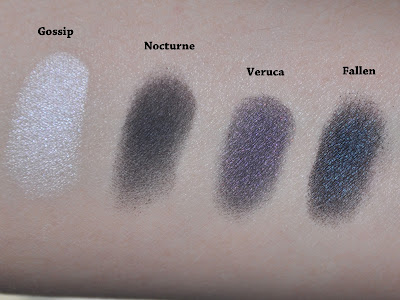 And just for one more look at them: 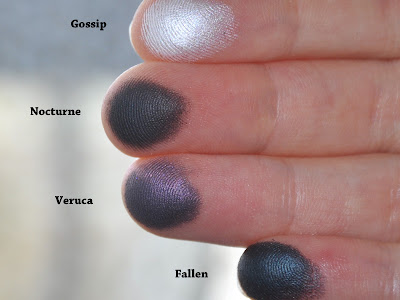 The other nice little touch--inside each eyeshadow box and included with my primer are little star stickers with cute little sayings on them. Such a nice thing to find! 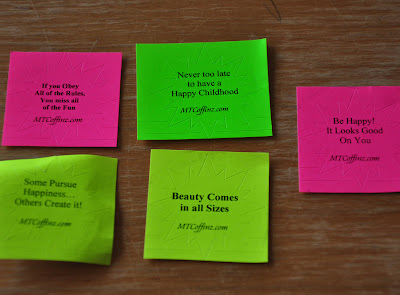 I immediately cracked my shadows opened and played with Gossip, Veruca and Fallen. These are both with the Under the Rainbow primer and NYX Eyeshadow base in "White" under the shadows.
Gossip + Veruca

Gossip applied like a freakin' dream. While Veruca and Fallen are both pretty colours in the swatch pictures, I find they photographed and applied a bit more similarly than I was hoping. I do use the flash for my photos, but you can't really distinguish these two colors from each other, unfortunately. I'm going to try applying them with different brushes next time to see if I can make the purple and blue tones come out more on my eyelid. BUT. What impressed me SO MUCH is this damn primer! The above two photos were taken at 8:26pm.

And these were taken at 12:17am (so only about 4 hours later, but STILL). This is the Fallen eye on the left and Veruca on the right. You can see a tiny bit of wear--but let me tell you all--these are the best results (HANDS DOWN) that I've gotten from a primer since ceasing use of Urban Decay's (un-vegan) Primer Potion! 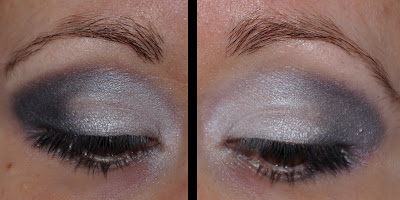 (This one can be enlarged quite a bit by clicking on it--so you can see up close the primer's results.)

I wasn't completely sure if these results were due to the primer alone or if the shadows themselves just had great staying power--so today I used the primer below my Madd Style Cosmetics pigments. I applied my makeup around 1:52pm and at 5:49pm it's looking just as good. So again, just around 4 hours. But I'll try to snap some pictures of around 8 hours a bit later in the evening.

So far I am very happy with my purchase from MtCoffinz cosmetics. I think I will need to pick up a few of their brighter colours--probably Nemesis and Rumor--cause they look awesome, RIGHT? :)
Posted by dslrbbt at 4:50 PM